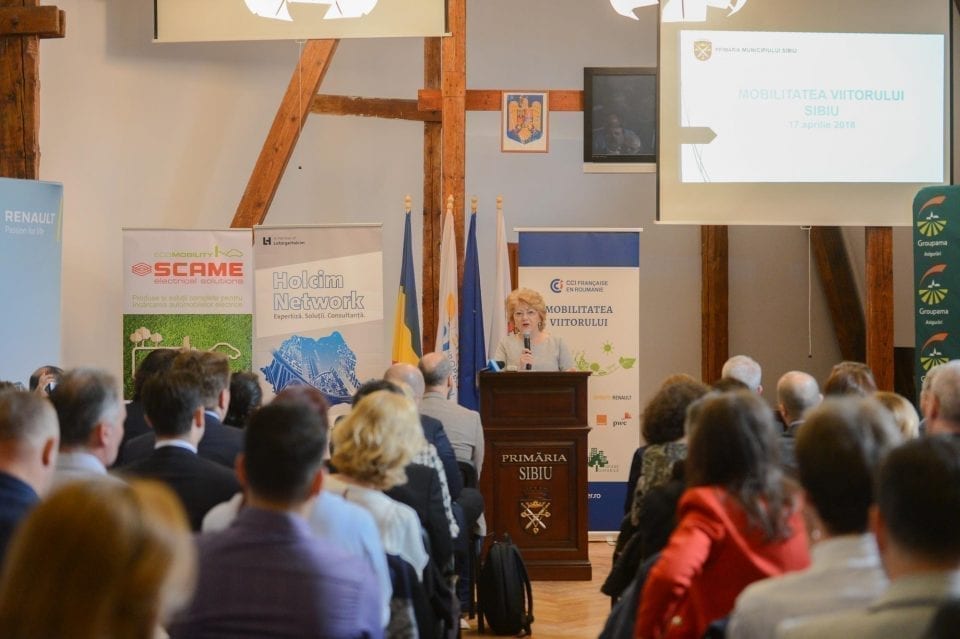 The municipality of Sibiu is one of the most dynamic cities in the country and has – besides a rich cultural life – a remarkable potential for economic growth. The development of Industrial Area West, the numerous new residential neighbourhoods as well as the expansion of business premises determined the Sibiu City Hall to search, in the past few years, solutions not only for a favourable investment climate, but also for easing traffic congestion

The municipality of Sibiu is part of the Centre region of Romania – together with Alba, Brașov, Mureș, Covasna and Harghita. Sibiu benefits from direct access to the A1 highway, part of Pan-European IV Corridor, the Nădlac-Sibiu route. Still, the connection to the southern part of the country is deficient, because of the lack of highway to link Sibiu to Pitești and București, respectively.

Sibiu, on track with international trends

Despite the demographic decline at a national level, Sibiu – as other flourishing county centres – annually attracts workforce not only from the county, but from across the country. It is one of the main development hubs in the Centre region, which in turn has the highest density of cities and municipalities in the country. Still, Sibiu polarizes not only the county workforce, but also the economic activities – including those connected to tourism, services, healthcare and college education. 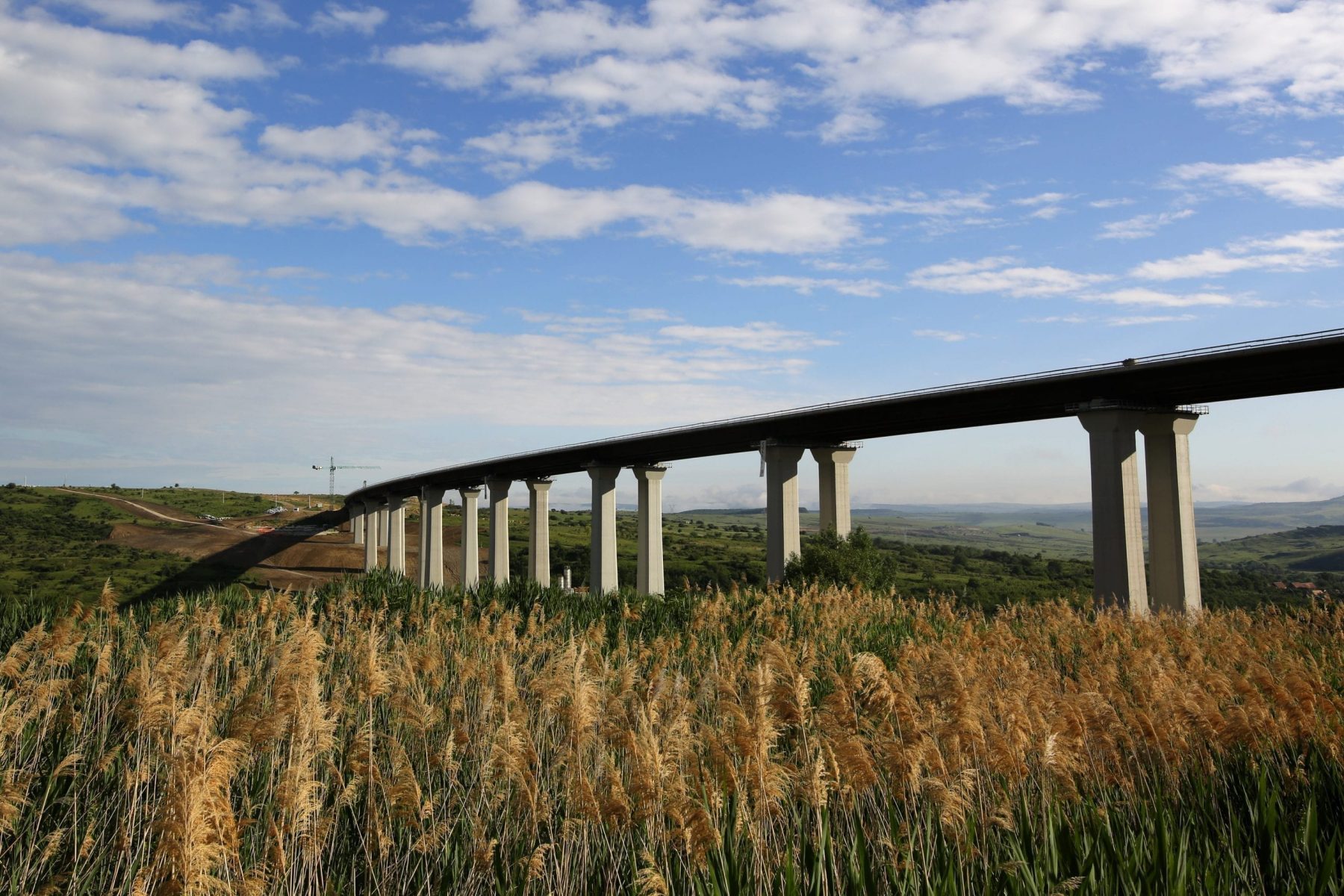 International trends on urban development show that the attractiveness of a city closely depends on a series of objective factors (the city’s connection to new technologies, environment awareness and limiting human impact, the encouragement of an active economic climate) and subjective (the dynamic ratio between job offers, standards of living and leisure possibilities). It is also important that mobility be facilitated and improved so that walking, cycling, driving or using the public transport do not hinder one another, and environment impact is minimum.

In the Sibiu Development Guide 2014-2024 there is a chapter stating that a dynamic economic climate, able to attract investors and at the same time to support local initiatives, plays a decisive role in defining a city’s development perspectives. For the last ten years, this aspect was high on the agenda of the local authorities, who made constant developments of the Industrial Area West. The diversification of the job offers had a direct impact on the local budget and on the people’s standard of living. A reality reflected in numbers: total budget revenues constantly increased for the past years: from 292 million lei in 2009 to 354 million lei in 2014 – and almost triple in 2018.

The way residential areas have developed in Sibiu 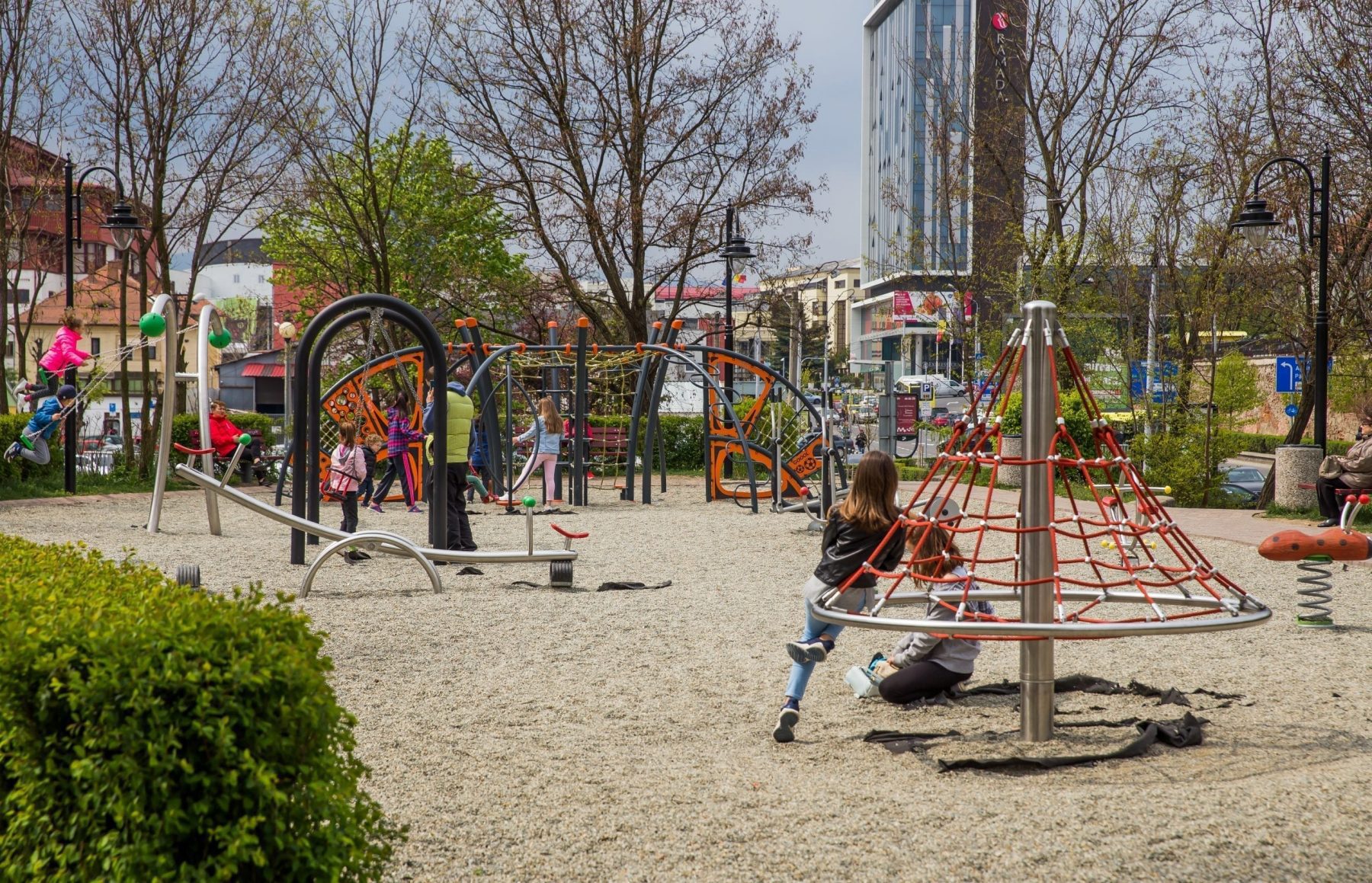 In 2009, Sibiu adopted a new General Urban Plan, through which the local authorities have projected a development idea based on the “Sibiu meeting point” principle, namely city’s progress as an attractive and interesting host for business, events, but also for tourism or studies. Therefore, Sibiu started developing from the centre to the peripheries on the land economy principle, following three main rules: the city internal restructuring areas become a priority compared to extensions on unoccupied lands; the extension of the intravilan area is based on the evaluation of land needs for the respective time period; the urbanization of the extension zones is achieved in stages. Over the past 15 years, the population and investors have reoriented toward the surrounding localities: Şelimbăr, Cisnădie or Şura Mare, where the residential neighbourhoods have undergone massive development. In parallel, the local administration has started ample processes of rehabilitation of the existing infrastructure, namely the heat insulation of old blocks, on the one hand – a process that is still ongoing – and, on the other hand, supporting the construction of individual dwellings: in the period 2002-2012 the residence stock in Sibiu increased by 14.8%. The maintenance of green spaces and the enlargement of their surfaces, along with the search for solutions to meet the population’s demand for the development of the sports infrastructure, are two other priorities that Sibiu highlights in what providing its inhabitants’ quality of life is concerned.

“The City Hall is supporting local economy through a large investment budget, in 2018, investments representing 54% of the total budget. That is why we are one of the largest consumers of work and services at a local level, especially in the domain of infrastructure and construction work”. Mayor Astrid Fodor observes.

But economic development was not limited to the construction of residential neighbourhoods, which could not emerge without a clear local perspective on the economy of Sibiu. In 2003, the Industrial Area West was inaugurated. This played an essential role in the competitive positioning of Sibiu on a regional level. Numerous investors have been attracted to this area and continue coming here, especially those in the automotive, IT or production of electrical equipment fields. 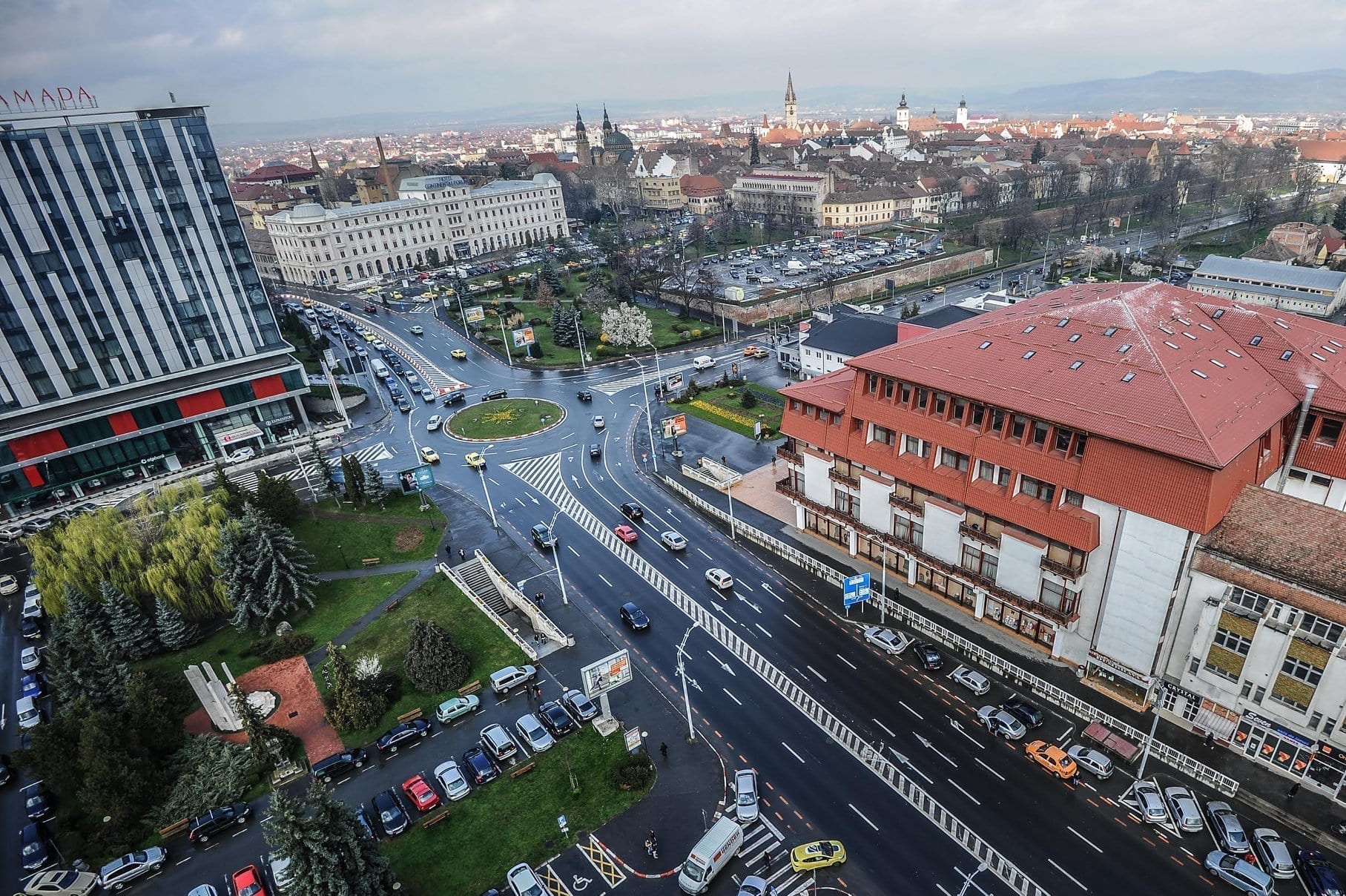 Until 2014, the rehabilitation and reconfiguration works were mostly concentrated in the historic centre. Starting with 2015, the Sibiu City Hall has embarked upon an ample action for the regeneration of the spaces in the neighbourhoods of apartment buildings, and according to the 2023 Urban Development Strategy all the neighbourhoods of apartment blocks in Sibiu will be included in this program, which involves the reconfiguration of the areas for better functionality, among which:

Besides these projects dedicated to block of apartments areas, and the rehabilitation of streets in neighbourhoods, individual projects have contributed to urban regeneration of the city. A total of 118 streets were completed in 2015-2017. Part of this regeneration is also the construction of new spaces for recreation, leisure and sports. Here as well, the Sibiu City Hall has completed several important projects: rehabilitation of two large city parks, creation of fitness and sports areas, creation of playgrounds and recreation spaces.

Parks, bridges, decommissioned thermal power stations, courtyards, squares and even streets in neighbourhoods have become a scene for cultural events. Urban regeneration consists of adding new functions to public space. The cultural act is no longer carried out only in the centre, but it extends to neighbourhoods.

Another example of urban regeneration through culture is the creation of the Culture Factory, a reconversion project initiated in 2014, consisting in turning a former industrial hall into a space for the Radu Stanca National Theatre’s performances, an institution subordinated to the Sibiu City Hall. Today the space includes 3 showrooms and exhibitions. 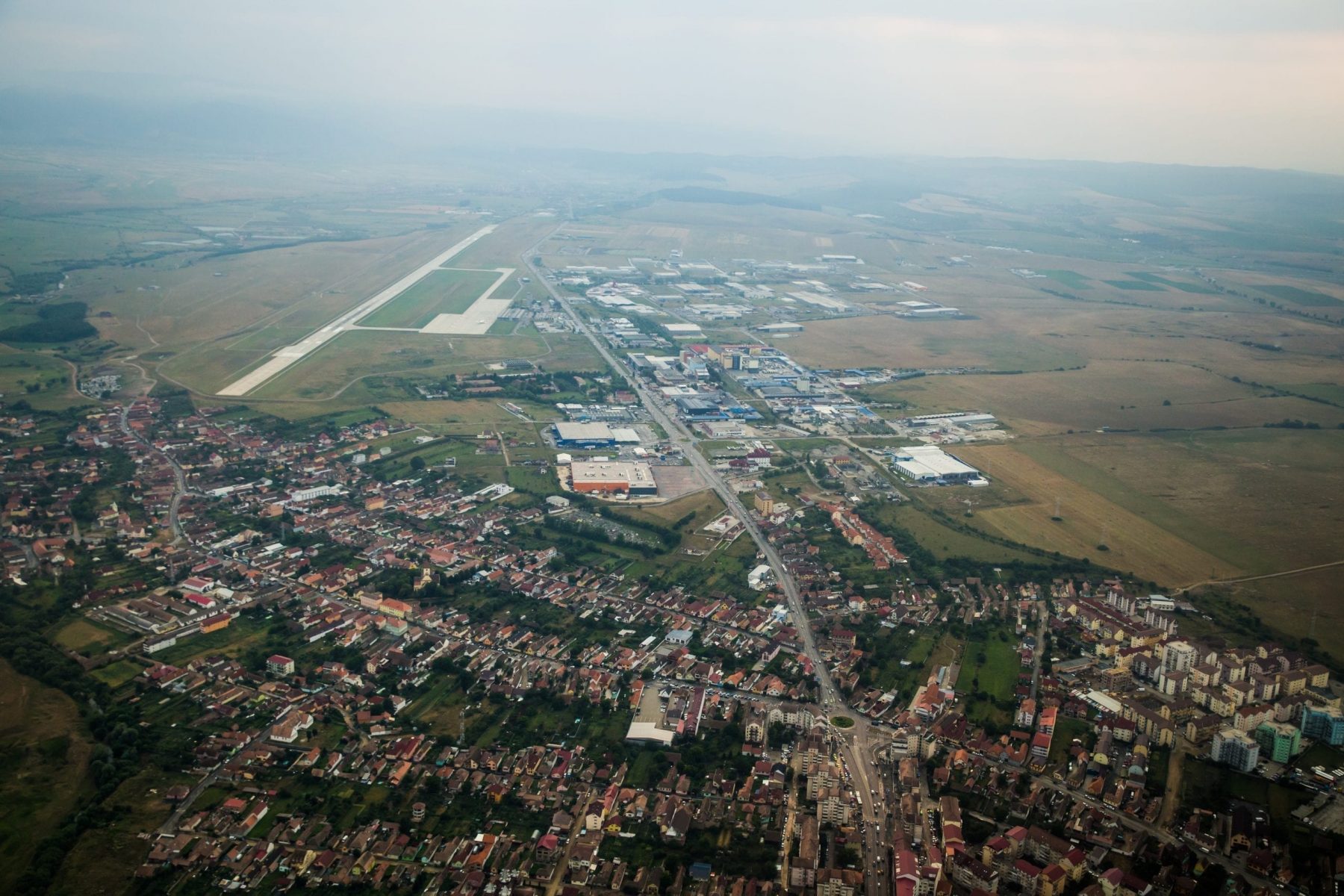 In the Industrial Area West, some of the largest companies with Romanian capital, as well as important foreign companies have their headquarters: the 12 largest multinationals in the area have over 12,000 employees, and in 2017 they had a turnover of over 5.5 billion lei. Numerous among them can be found on the list of the most important taxpayers to the state budget. In total, there are in Sibiu more than 50% of the large companies functioning in the county, out of which nearly the majority in the Industrial Area West. Approximately one third of the companies are with Romanian capital, which means an important presence in Sibiu of domestic entrepreneurs, four of them being the most powerful at national level.

“The presence of large investors in Sibiu made the county to occupy the first place among the counties of the Centre Region, where the highest net salaries can be found, and, at a very small distance, in Brașov County, the only ones above the regional average”, according to a report of the ADR Centre in 2018.

To render this area attractive, the Sibiu City Hall has invested in viability, providing water and sewerage networks, creating the road network in the area and public lighting, and extending public transportation routes for local factory employees.

In 2019, the extension and modernization of one of the main roads in the area began, in the context of the expansion of the production units here. Additionally, extension of the public lighting network is also planned, and arrangements will be initiated for the construction of a new connecting road with the city in order to streamline traffic for the nearly 15,000 employees in the area.

Owing to its territorial dimension, Sibiu has evolved as a friendly city for all types of transportation, including for pedestrians, especially in recent years. If until recently, traffic planning was strictly referring to motorized journeys, the idea of mobility – intensely promoted all over the world – prompted local authorities to create viable travel policies, for the public space to take also into account cycling or walking.

Sibiu has become well known as one of the friendliest cities for cyclists in Romania: if only 2,5 km of track were set up in 2007, the first bicycle track on the roadway was inaugurated in 2011, and at the end of the year, the total length of the bicycle tracks exceeded 62 km.

Currently, the total length is approaching 80 km, the city mobility tracks are complemented by the leisure tracks in the forest area at the exit of the city. But this would not have developed so fast if local civil society were not involved in promoting the idea of using bicycles in the city, as well as improving public policies regarding urban mobility. 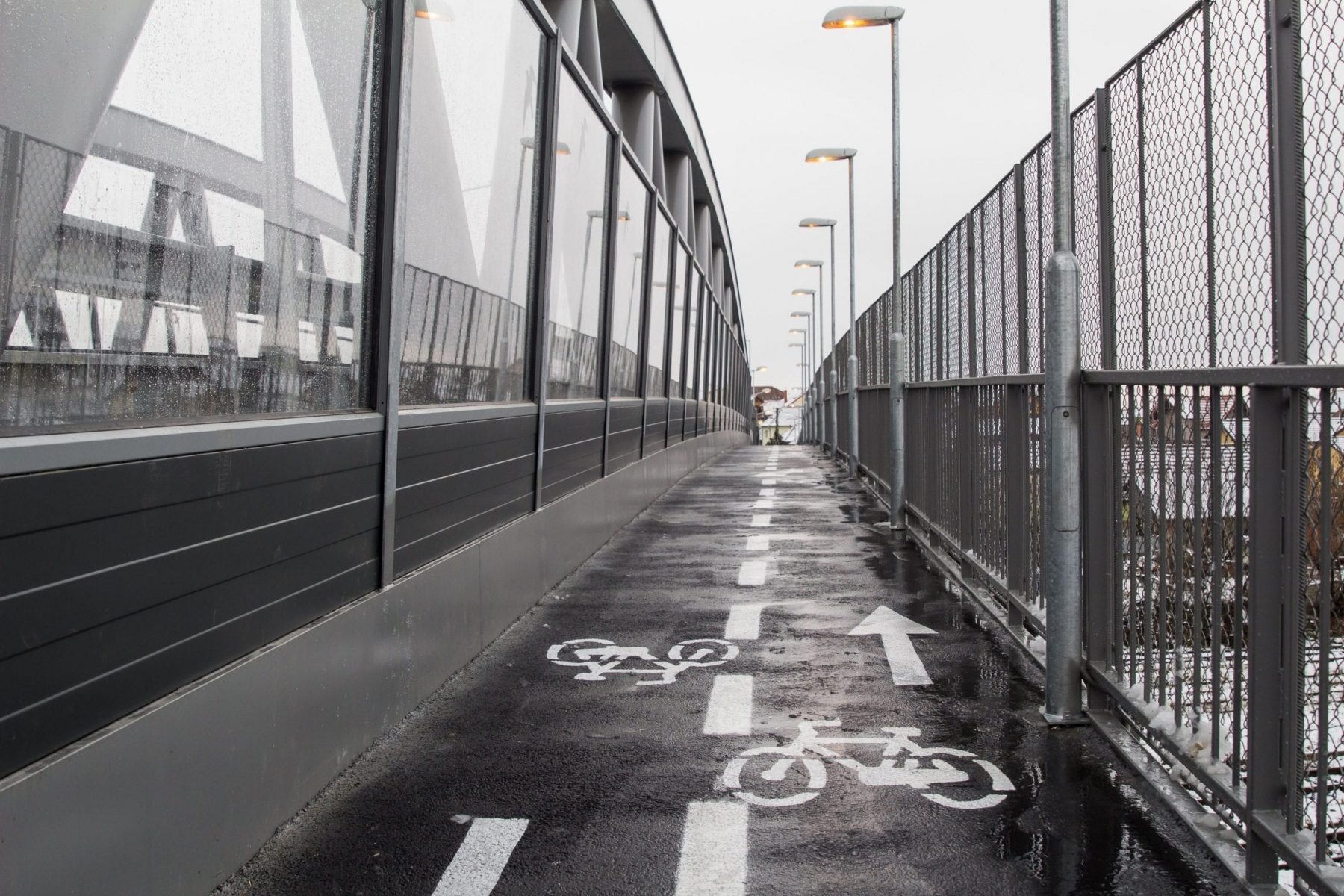 In recent years, urban public transportation returned to the attention of local authorities. The doubling of the number of passengers on the buses of the Tursib transport company led the City Hall to renew its transport fleet. In 2019, the first buses from the batch of 55 buses purchased in 2018, began to circulate on the streets of Sibiu. The procedures to buy another 60 buses, including ten electric buses, are to be finalized. Nevertheless, the reorganization of the transport network requires not only the purchase of new vehicles, but also the possibility of creating traffic lanes dedicated to buses, routes to the Industrial Area West, along with relocating stations so as to increase intermodality with other regional and national modes of transport, according to the Mobility Plan of the Municipality of Sibiu. The idea proposed by the City Hall through this Plan also focuses on the concern to create mobility especially for people and not for cars and the implementation of European concepts on sustainable mobility: “It is necessary to create a major route favourable to non-motorized journeys in order to connect the western area of the city, the historic pedestrian area and the train station. It supposes the construction of a coherent course, with comfortable traffic and pedestrian crossing conditions and landscape attributes (wide sidewalks, no obstacles, vegetation and shade – alignment plantation, high quality street furniture – inclusively for leisure, safe and comfortable crossings for pedestrians , eliminating parking on the street along the route); as well as the creation of bridges for non-motorized journeys across the Cibin River and the railway.

The number of parking spaces for the rising number of cars remains a challenge for local authorities. “Since our city is a cultural one, with hundreds of annual events, we feel the lack of more large indoor spaces. We found the solution in this case too: the construction of the conference and shows centre.

The Zonal Urban Plan is in progress and we are going to organize a competition for architectural solutions destined to this strategic objective of Sibiu”, the Mayor of Sibiu concludes. Last year, local authorities started the necessary documentation for the construction of two underground car parks and one above-ground.

In 2018, for the second consecutive year, Forbes placed the city of Sibiu among the top ten cities for business in Romania. The Smart City Sibiu project, whose goal is the promotion of smart solutions for electricity generation and consumption, the e-administration platform, which the City Hall has gradually improved, permitting people to pay online taxes and duties, to submit petitions, the 2017 extension of urban planning certificates and building / dismantling authorizations in electronic format, as well as certificates of fiscal ascertaining for lands and houses, and the introduction of intelligent lighting in parks – are just some of the projects that propelled Sibiu among the top cities in the country.

[Enjoy Transylvania!] What to do and what to see in Harghita